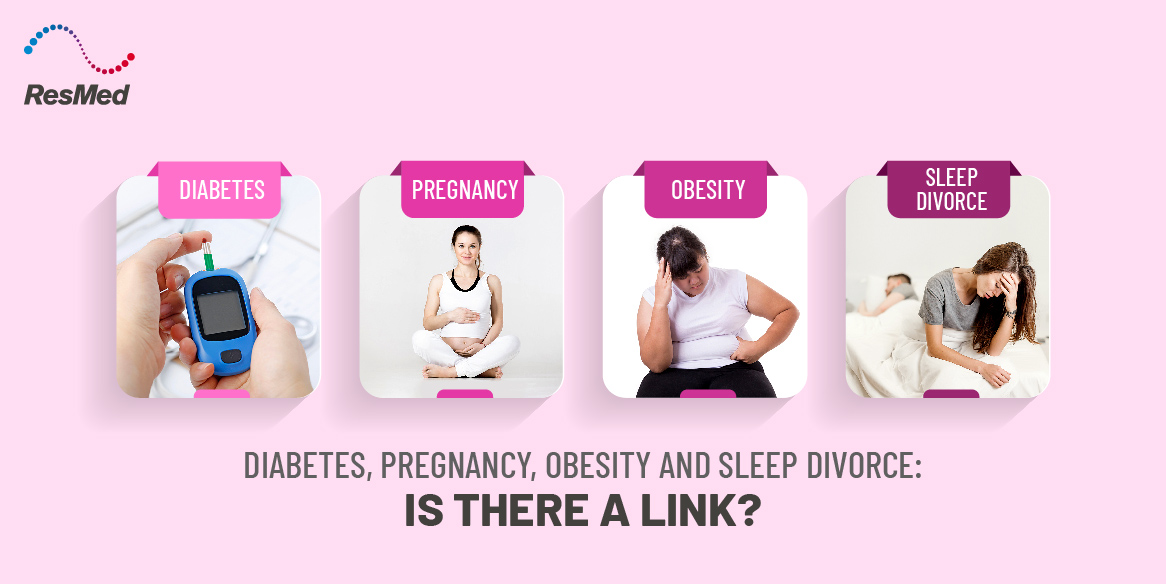 Diabetes, Pregnancy, Obesity and Sleep Divorce: Is There a Link?

Obstructive Sleep Apnea (OSA) refers to a sleep disorder where an individual’s breathing is involuntarily halted due to the over-relaxation of throat muscles. People suffering from OSA have several such incidents during the night, which hampers blood flow into the brain, thereby resulting in fragmented sleep. This poor quality of sleep results in chronic health complications such as type 2 diabetes, obesity, and cardiovascular disease.

OSA affects both men and women, but while there is no definite explanation to distinguish the symptoms in men and women, there are several studies that show that women might be affected differently.

Women suffering from the following conditions can have OSA:

It has been shown that some pregnant women who have OSA may develop gestational diabetes due to a lack of healthy sleep. The research has linked a poor night’s sleep to elevated blood sugar levels in pregnant women.

Gestational diabetes is a condition seen in pregnant women during the second or third trimester. Usually, these pregnant women may not exhibit typical features of Type 2 diabetes-like symptoms, and very often under proper treatment, the blood sugar levels return to normal. However, this condition may persist to take the course of Type 2 diabetes, if not managed properly.

Studies have shown that the average sleep duration of fewer than six hours at night was associated with a 1.7-fold increase in the risk of being diagnosed with gestational diabetes.

What is Sleep Divorce?

It’s not just the physical, but also the emotional and psychological effects OSA has on a patient and their partner. Pregnant women may also have a lack of sleep due to their partners snoring at night, thereby losing sleep in the process. Due to this, ‘sleep divorces’ have become a reality. This means that a couple – one of whom has sleep apnea – do not share a room, but rather sleep separately at night. The reason, they say, is to ensure that marital spats do not happen due to lack of sleep.

This, too, is a thing. A 2017 study found that couples who get too little sleep (less than seven hours per night, as defined by these researchers) are more likely to have marital spats and become hostile to one another. Their stress-related inflammation is also higher, which could lead to many chronic health problems.

But can sleeping separately cause further problems? Sure, it can, but there is always the option of getting treated for OSA.

Notably, all these conditions can be treated. However, if the patient gets treated for sleep apnea so that they get a good night’s sleep, most of these complications – with the right balance of diet and exercise – will get fixed.

Timely treatment for OSA ensures that your airways remain open during sleep so that you can breathe normally. One such intervention is the continuous positive airway pressure (CPAP) device that is commonly used to treat OSA.

Disclaimer: The facts and information contained in this article are obtained from reputed medical research organizations and do not necessarily reflect the opinions & beliefs of ResMed. The content here should not be taken as medical advice. The content is for informational purposes only and because each person is so unique, please consult a healthcare professional for any medical queries.

Most people exercise and eat right but still feel lethargic during the day. Despite practising yoga ...

This World Sleep Day Know What’s Keeping You up at Night?

We spend one-third of our lives sleeping. This factor alone should be enough to explain the ...

What are the Possible Hidden Dangers of Sleep Apnea?

Is your partner irritated by your habit of snoring at night? Does she complain that you wheeze so ...

How Sleep Deprivation is Linked to Social Isolation?

Gaining a restful night of sleep keeps you fit and active. When you catch on to the recommended 7 ...