Are you sleeping around the clock? Excessive daytime sleepiness can signify sleep apnea

There are times when it feels like a real struggle for some of you to keep yourself awake while sitting in front of your desktop screen or while you are out on a road, driving. Asleep while driving? Sounds scary doesn’t it, well it is true, according to National Highway Traffic Safety Administration estimations, drowsy driving was responsible for 72,000 crashes causing 800 deaths in 20131. National Sleep Foundation also revealed in their 2008 Sleep in American Poll, that 36% of Americans while drive are either drowsy or fall asleep while driving2.

Daytime sleepiness is a bigger issue than it seems and that is why it needs to be addressed more solemnly now than ever before. In fact, it is a lot more than what can be excused for having a tiring day or restless sleep at night. Researches state a striking relationship between sleep disorders and excessive daytime sleepiness (EDS), of which obstructive sleep apnea (OSA) is one. Patients suffering from OSA often show symptoms of EDS caused due to poor nocturnal oxygenation and dysregulation of autonomic function. It is believed that these factors are responsible for the destruction of neural networks responsible for wake promotion, also it causes autonomic arousals causing disrupted sleep3. 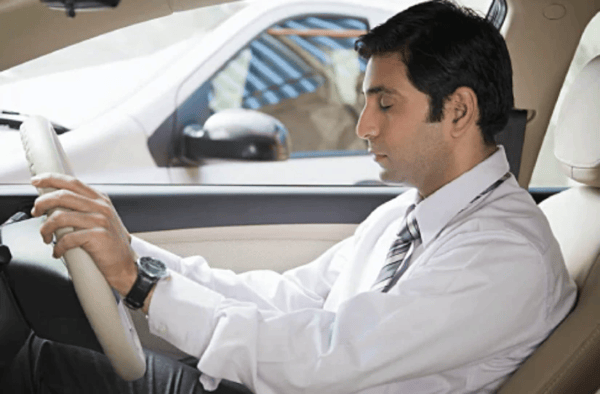 This is possibly the reason that people with sleep apnea wake up feeling fatigued and overly tired experiencing a phenomenon termed as Dysania or clinomania attributed by a feeling excessive stress or anxiousness while getting out of bed in the morning.

The fatigue and daytime sleepiness experienced by an OSA patient is different from feeling of tiredness and can have negative consequences if ignored for too long. This is the reason it is advised to get regular health check-ups to diagnose the problem as early as possible to seek the best and effective treatment. If getting up in the morning causes you extreme stress to you on most of your days and you find it difficult to keep your eyes open in the most demanding situations like driving, then it is a sign that your fatigue is not just due to physical tiredness but a lot more.

OSA is being recognized as the increasing cause of medical morbidity and mortality. It is important to spread the awareness about its causal factors and potential symptoms to let people recognize its prevalence in around them as well for themselves, to reduce the burden of sleep apnea globally.

What Reasons can be Held Responsible for Keeping Children up at Night?

Sleep is something that is essential for the well-being of an individual. If you don’t rest well at ...

Getting a good night’s sleep is vital for the proper growth and development of kids. Also, failure ...